Winds they are a - changing.

With six glorious action packed months of fun, frolicsome adventure and furious laughter it was time for the girly swash buckleing dream team to go their separate ways. As we finally headed for Tahiti Karen and Lesley booked their flights. Karen was off to Spain to join another boat and Lesley to soak in some Cornish air, bask in some comfort, and enjoy cornish pasties and cider.

Two lovely, lovely people who are welcome back to Saorsa any time. I never did work out which one was the boat wife as they both referred to each other as such, but truly two very different people that helped create a great, unforgettable Saorsa girls team.

Thank you both for being such magnificent crew, creating fun and adventure with character, charm and of course some northern bluntness when needed. Always willing to get stuck in regardless of the mess we were sorting out and most importantly, creating a great spirit on Saorsa that looked after the boat and each other.

Before they departed we had some time to pack in a few things:

Rangiroa: A pass into the atoll to be reckoned with! Fortunately we timed it right, but really enjoyed the Jospehine café, watching others negotiate the 6 – 10 kt currents through the pass. Thanks to young Briach (our 23 year old surf hunk helping our Argentinian friend on Volunteer), we found a lovely Tahitian wine to quench our thirst as the sun set.

A huge highlight for me was a dive through that pass with an outstanding dive guide called Teddy (6 passengers dive school). We descended to be part of a bustling city of beautiful fish and marine life, with great visibility. After about 20 mins I could not believe my eyes, Teddy was playing at 25m depth with 5 Dolphins – it was incredible and he invited me to tickle their tails and stroke them gently as we watched them perform around us.

After a while they swam off and we flippered away only for me to be nudged on the back of the head by the nose of a wild dolphin – he had come back to play.

I could not shut up talking about it and went back the following day for more. It was such a good experience. Karen and Lesley had met Teddy and liked him and the dive school and were inspired to do a trial dive.

I think Lesley will be PADIs next recruit. Conversely our Northern Lass found it restricted the chat somewhat and it wasn’t for her.

Tikehau: After a choppy shake up through the southern pass of Rangiroa we headed for the atoll of Tikehau. A howling gale reducing visibility to 20m hit us just before the atoll pass so we headed back out to sea, let it blow through and then the Saorsa team flew through the pass to the flat waters and awesome anchorage just inside.

Predict wind (weather forecasting software) had given us a heads up about a 4-day-long Marimou (wind) coming in. Having spoken to the locals we headed for the Black Pearl anchorage and sat with a smile on our face for four days in 35kt winds, blue skies and flat seas. On the advice of some experienced atoll cruisers we rigged our fenders to float our anchor chain above any bommies and reduce snatching: It worked! 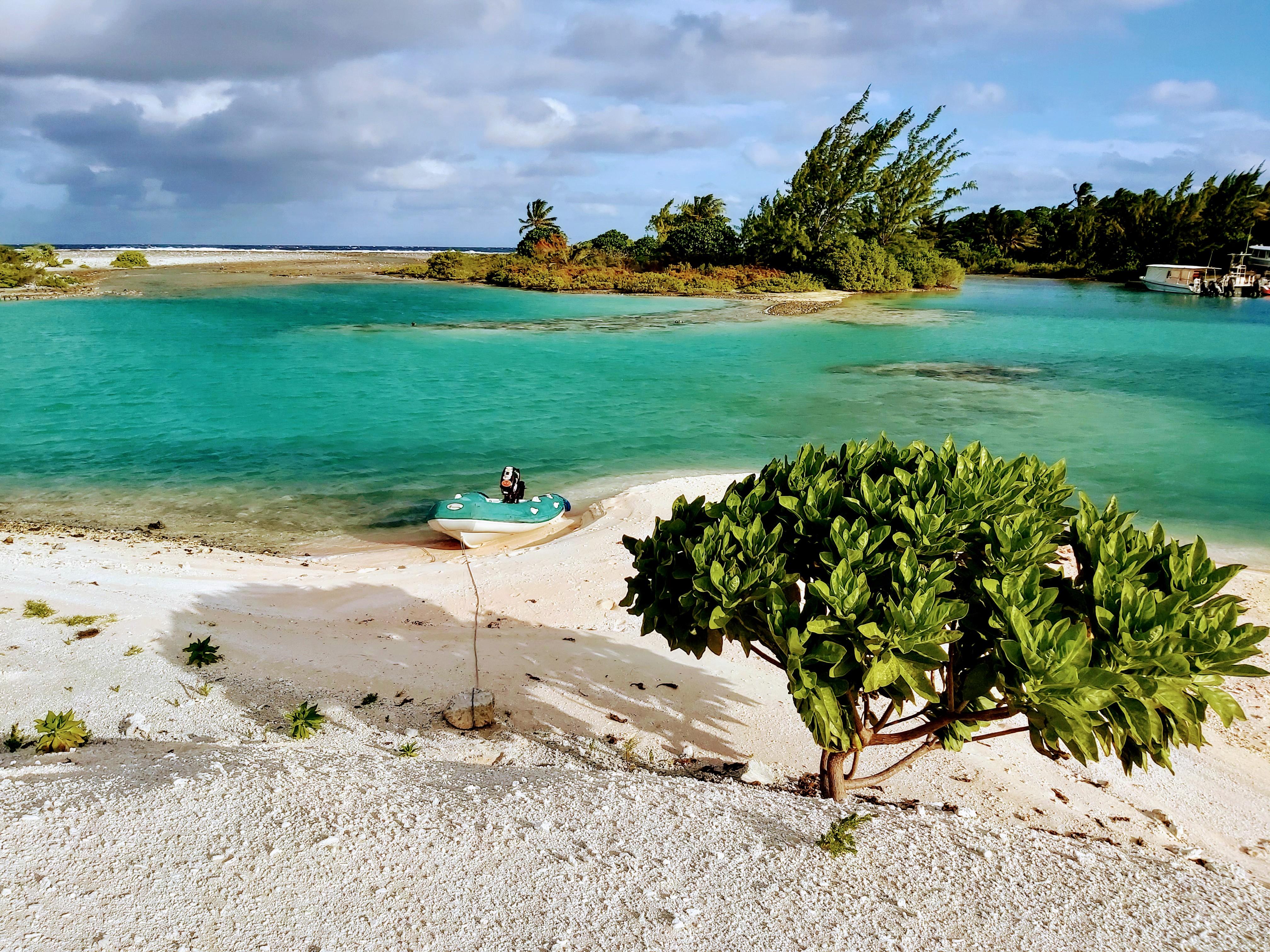 It was in Tikehau that a boat guest who joined us in Rangiroa departed. If I ever write a book there will be a whole chapter on this intrigue but for now all I will say is that we girls revelled in getting our boat back to ourselves.😊

Strong winds abated and time for a very dark but speedy overnight sail to Tahiti was upon us. I wasn’t really looking forward to civilization but we managed to get a berth at the downtown marina, right in the centre of Papeette and so handy for getting access to chandlers, tradesman, hardware shops, restaurants and bars. It had been six months since we were last in a Marina and about time Saorsa got some TLC.

We took a few days out during the girls last week – a beautiful waterfall walk with our “Somewhere London” friends and some fun surfing with Briach and Estaban. Even treated the girls to the unique experience of a night suspended in a sling waiting for the prop speed to dry and ready for launching the next morning. – Never a dull moment on Saorsa.

Sunday the 12th July arrived and it was time for the girls to pack their bags and depart. Yes, I was very sad to see them go, but also hugely grateful to them both for the incredible time we had together, for their friendship, help, humour, education (on many varied matters), and laughter. – THANK YOU, I had a blast. Hope to have you on board again sometime.

That flag has seen a bit of action, it was new when they arrived on board..